ProForm is offering discounts that are larger than the coupons we normally offer. As such, coupons will not be added on top of these great deals.
See These Deals Now 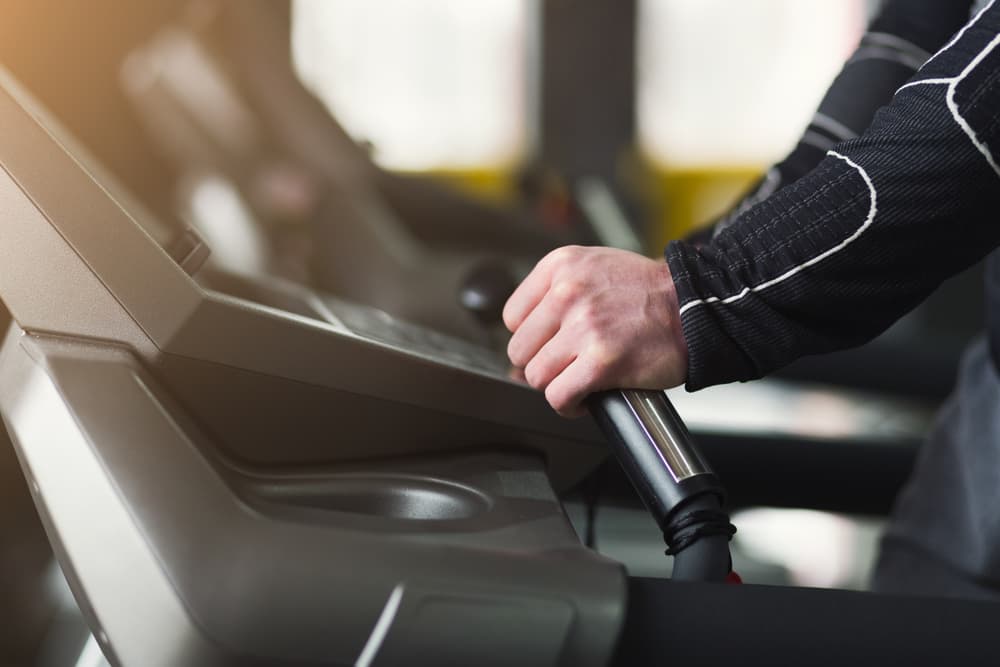 Think about the last time that you were on a treadmill, you had your sneakers laced up, heart pumping, music blasting…but where were your hands? Oddly enough, it’s a biomechanical aspect that we don’t often consider when we hop on the tread to log some miles; however, it’s important to think about, especially if you realize that you’re hanging onto the treadmill handrails for dear life during your entire workout!

Although it might take some time to get used to, many people can exercise on a treadmill without using the handrails (although if you’re in physical therapy or have balance issues, please speak with your therapist or trainer as to how to go about this safely and/or how to make modifications appropriately). Ultimately, the handrails are on the treadmill as a safety mechanism, and to assist with balance when needed – which in some cases, is appropriate! However, they should not be used during continuous exercise, and there are many reasons why.

Let’s look at some of the issues that might arise while holding onto the handrails of a treadmill while working out, and then some ways that you can slowly learn to stop using the handrails!

Is It Bad To Hold Onto The Treadmill While Exercising?

Although using the handrails on a treadmill can help inspire confidence for a beginner, it can cause issues after a while. There are four major reasons why you should stop hanging onto the treadmill during your workouts!

For one, your posture is totally thrown out of whack – especially if you are exercising at a high incline and speed.

Second, the handrails don’t mimic actual walking or running if you were outside, after all, you don’t hold onto handrails when you’re out on a walking trail, hiking, or doing a 5k race!

Third, you aren’t able to develop a correct sense of balance using the handrails. Yes, it can be strange to be moving on a belt and not actually “go” anywhere, but, balance and stability can easily be obtained with practice!

Lastly, you are going to end up burning fewer calories and engaging less musculature if you are holding on for the duration of your workout since many muscles won’t be engaged properly as they would without holding on.

How To Walk On The Treadmill Without Holding On

If you have realized that you’re holding onto the treadmill handrails and want to wean yourself off of them, it’s certainly doable! One of the first things that you need to do as you stop using the handrails, is slow yourself down. If you are used to power walking but you are only staying upright due to holding on, it’s time to dial back the speed a bit. Your body will need to relearn the movement pattern and begin to engage your core and other important muscles in order to stay upright, which is easier to do when you slow down a little and get your bearings (and balance).

Along with the speed being reduced, you also want to focus on lowering that incline, if you have been using it while utilizing the handrails. Once your body gets used to the fact that you don’t need to hold on in order to climb that 8% hill, you can then begin to build your incline back up – knowing that the proper muscles are firing and that you aren’t just holding on to the handrails to make it up the hill!

Next, you want to pay attention to your overall posture. When holding onto the handrails, we have a tendency – especially at higher inclines and speeds – to lean really far forward or really far backward. This not only places the body in an awkward walking position, but it also doesn’t allow for the proper muscles to be engaged while you are walking or running. When you’ve got the treadmill set on a slower speed and lower incline, think about your posture from the head down.

First, think about someone pulling up on the top of your head with a string – this automatically raises you up straight, and then you can pull your shoulder blades down and back together while simultaneously engaging your core. Make sure that your gaze looks forward as well, which will help keep your head level as you move.

Remember that if you are feeling nervous about letting go of the handrails, it’s okay! Utilize the safety clip on the treadmill if desired (this will stop the treadmill immediately if the clip is removed from the machine) and slowly increase your speed and/or incline as desired until you know that your balance has improved. You’ll be hands-free in no time!

Get Fit And Save Money